On text sorting, the fact that Notepad++ is the best text editor, and 2011 wishes!

A few years ago I spent some time looking for the best text editor for Windows. After testing pretty much all the editors available at the time (Notepad2, Notepad++, UltraEdit, UltraPad, TextPad...) I finally reckoned that the most powerful and versatile one was Notepad++. I have been using it since then and I regularly recommend it to other people. I could not convince my father to ditch TextPad though because of its superior text sorting feature. It's true that the standard sorting plugin shipping with Notepad++ is pretty basic. It only lets you sort the file at a given column and by lexicographical order only. TextPad on the other hand lets you define a sort criterion based on up to three user-defined columns. Also for each column the comparison can be either numerical or lexicographical.

The thing is that I am very stubborn: Notepad++ is the best editor for Windows, and so to prove it to my father there were no way round it: I had to implement the missing sorting features for Notepad++!

Because Notepad++ is open-source I was able to start from existing code. It thus took less than a day to implement the missing feature as a plugin! Of course it had to be superior than TextPad's implementation. Hence it lets you define an unlimited number of columns, unlike TexPad which is limited to only three. 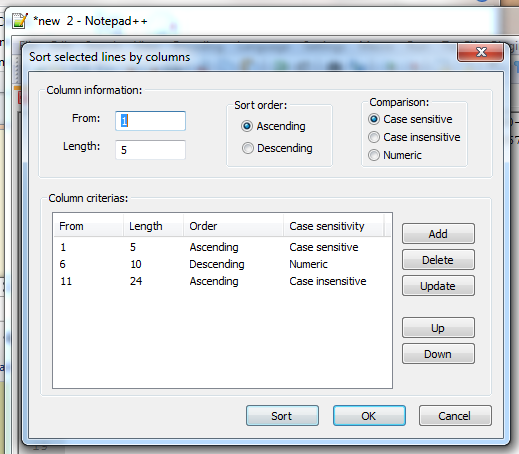 I figured out that my father may not be the only one interested by the plugin so here you go: You can download the plugin including sources at NppColumnSort-1.0.0.2.zip

I take the opportunity to wish you a great year 2011 and hope that all your problems will be sorted in whichever order you prefer be it lexicographical or numerical!